At the IWA Project Innovation Awards in Tokyo, Japan, the City of Altamonte Springs’ water treatment project, pureALTA, received a top award in the Market-Changing Water Technology and Infrastructure category. The award recognized the City’s success in delivering forward-thinking applications and solutions to advance clean and safe water goals.

“We are proud to stand among such exceptional water projects,” said Frank Martz, Altamonte Springs City Manager. “Water is essential for everyone on the planet, and we are focused on finding and sharing water preservation solutions. Taking steps to do so was a major goal for the City of Altamonte Springs, and we’re deeply humbled to receive this international recognition.”

The pureALTA project was created by the City as a proactive approach to address the community’s water supply needs. It takes reclaimed water and treats it to meet or exceed all drinking water quality standards, using a cost effective and energy efficient system.

This award-winning system treats approximately 28,000 gallons of water per day, with the potential to treat up to 500,000 gallons daily – about 5 percent of the City’s future daily water demand without drawing from the aquifer.

The project was supported by Biwater Inc. who designed, supplied and commissioned the ultrafiltration system for the facility using Toray membranes.

“We are proud to have participated in this cutting edge facility. The City of Altamonte Springs and Carollo Engineers have delivered exceptional work, and we congratulate all involved on the project’s success.” said Jorg Menningmann, President, Biwater Inc.

This is the second time the pureALTA project has been recognised with an international industry award. In 2017, the City’s pureALTA project was named the Innovative Project of the Year at the 32nd Annual WateReuse Symposium in Phoenix, Arizona. 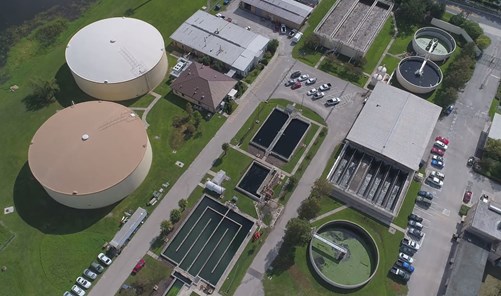